Some of the junior class went to the P-Factor on Friday the 10th of October. The P-Factor is a poetry competition in Ryedale junior aged children. During the day we first all did some workshops with some of the authors who were judging the P-Factor.  Once the workshops were finished we had our packed lunches.

After lunch the P-Factor competition began. 12 schools entered the year’s P-Factor in The Milton Rooms. After everyone had done their poems Andy Seed announced the runners up and the winners. We came second and each got a very nice medal!!! Langton Primary School came first and won the P-Factor and received a trophy. Even though we didn’t win we had a lot of fun and hope to do it again next year!

By Esme and Jasmine 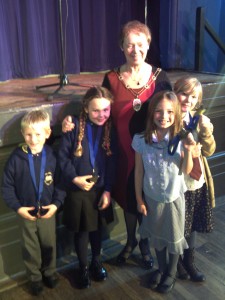