My brother and his friend made a treasure hunt for my sister’s birthday.It went all over the place.

The first clue ended up along the track to the red swing. The clue was shoved in the middle of it. The next clue was where our Grandma does all of her bonfires. This one was down at the bottom of the wood, hidden on the ash. Then the next clue told us to go to the swing, with the tire-swing. A few fields away from where we were. It was hidden where the band was, popped in.This clue told us to go to our Grandma’s house in the kitchen. It was hidden in the fridge. We were told to go, from the kitchen, to the big blue van, in the drivers seat. We went to the avalanche place next, just down the road, for the final clue. It was hidden back at home in the kitchen, the prize was hidden in the towel draw.

We split up into teams and raced back. The teams were fairly split up.

We had great fun, and anyone can set up an easy treasure hunt.

In the juniors we have been writing 500 words for a compatition. We all are trying  to  achive this, I think we will hopfully. Runners up and first place will get to go to London to a palace.

On Monday 9th of February we went to Pickering for a trip,  to see  the Pickering flood defences and how they cope with the floods.

The Environment Agency has  a project that is called “Slow the Flow”. They have built a very large reservoir which can hold millions of liures of water and slow the river down. They are putting things in like natural dams that are called mini bunds in the woods. They are good for the envioroment and animals near by. 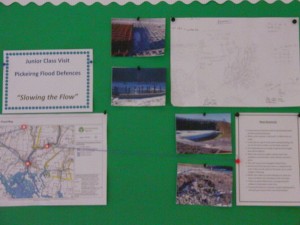 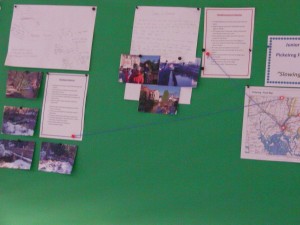 On Wednesday 11th February 2015 3 candidates A B C came in for an intaview. Our student council asked some questions with some help of Revernd Mark. After that the three teachers came in to our classrooms to look round, also they gave the juniors some tips for the 500 word writing competion.

Everybody enjoyed meeting the three candidates and  we all had a great morning. We love each one to join our school!

by Elisabeth, Lottie and Kate

Recently we have been making cave paintings the instructions are:

1. We got a piece of paper and lighly drew our painting on it.

2. After that we  got black paint and a paintbrush.  We used the wooden end of the paintbrush which wasn’t the easiest.

3. With the end of the paintbrush we dipped it in to black paint and copied our paper drawings on to a rock. 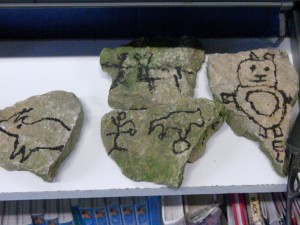 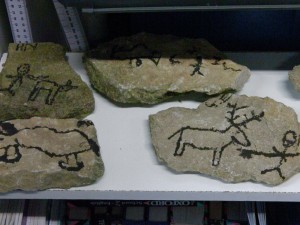 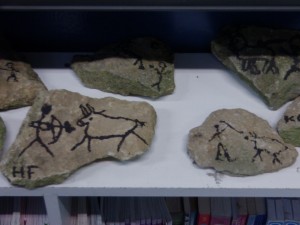 BY Megan and Emilia

Recently we’ve been reading about Robinson crusoe and his life by Daniel Defoe. So Mr Dean and the juniors decided that we were going to make a den for him to sleep in. We drew the first design and did some rough doodles and then when we had picked the one that we wanted to do, we turned the page over then did a neat carefull final design . After that we started to think about the matirials and the tools we were going to use. We then started thinking of the steps. Once we had atleast got 8 steps down we could get some matrials and start measuring them out and gluing then together with a hot glue gun. Hannah F and Goergina used mod roc. Lots of other people used hot glue. We are trying get them done by next DT lesson and completing them. 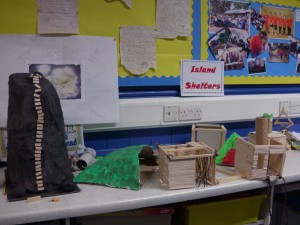 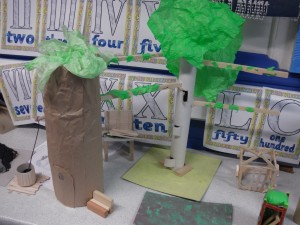 On the 4th February  2015 our school was closed because the amount of snow. A lot of us went sledging or built snowmen,where as me and my brother Obie decided to go and  play on the slippery  trampoline, while mum made an igloo we only got half of it made though. I asks Mr Dean how much snow there was at school. “There was about 5 inches of snow at school,” he answered. The powdery snow kept on falling from about 7am untill late evening.

Luckly we came to school the next day and we got to make  snowmen, play and see all of our friends.

Some people from the juniors (Kate, Hannah, Lilli, Lottie, Jasmine, Hannah N and some children from Hovingham) went to Pickering Leisure Centure on Wednesday 27th January 2015. The indoor athletics competion person who taught us all our tricks was Mr Muholland our P.E teacher. I , Hannah N, did the obstical course, where we had to: first do a forwards roll, then jump over the hurdles (they were quite high) then do 10 bunny hops (actually called speed bounce) then jump over some more hurdles and finally kick off a board and run straight back. I, Lottie, did  an activity called chest push. Some people thought different things here are some :

Lilli: “It was brilliant but i wish  everyone had stayed until the end.”

By Hannah N and Lottie.