Ryan was out walking one day in his field when he found a parachute and what was left of a balloon. A few weeks later his mum found a Radiosonde which was attached to the balloon. 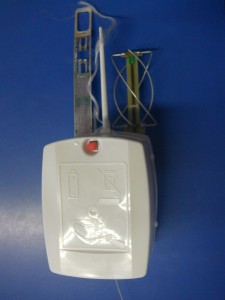 When Ryan brought it into school we rang up the people who made the device to find out more about it. This is the information they gave us:

They are sent up by a helium balloon 35km into the atmosphere and when the balloon pops they fall back to earth on a parachute.

The helium balloon is about 6ft across when it sets off and as it rises it grows and becomes the same size as a semi-detached house before it finally pops!

It was sent up by the Met Office site at Albermarle, Newcastle. They send two per day at 12am and 12pm. The device records air temperature, humidity, pressure, wind speed and direction. It can record temperatures of +50 degrees down to -90 which is how cold it can get 35km up!

The information is relayed back to earth over radio waves and sent straight to the Met Office super computer in Exeter. There is no data actually on the device.

The water bottles are to activate the batteries and keep them from freezing over.

The model that you found is very soon to be out of date and replaced with a smaller model which has less impact on the environment.