Last Friday the year threes and fours went to a rounders competition at Ryedale school. We had loads of fun and got a few rounders. We were looked after by some sports leaders like in every competition. We did very well and we enjoyed playing rounders. These are the people that went: Ed, Laura, Alice, Liz, Katie, Oliver and Benjamin. We think we came 4th or 5th but we all did what’s important and had fun. We did brilliant!

On Friday the  8th of July 2016 we – the 2 year 6s – went to Ryedale for a transition day. But unlike all the other transition days this one was sporty and we played rounders in our houses. But our houses were to big. So we split them up into groups of 7 or 8.

It was an amazing opportunity to mix in our houses and talked to other people, we haven’t met, as a team.

Minnie says: “It was a amazing opportunity to meet new people and work as a team, I had lots of fun!”

Lottie says: “I met lots of new people and had fun playing rounders.”

The end results were:

The afternoon was great we both had a fantastic time and we’re looking forward to spending time there in September.

By Lottie and Minnie 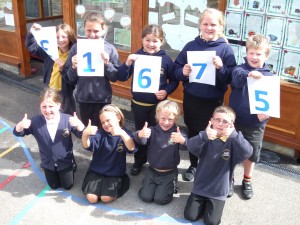 Now in our third year of fundraising and supporting Birunda the pupils, parents, staff and friends of Gillamoor CE Primary School have surpassed all previous years’ totals by raising an unbelievable £1675! Not too bad for a small school of 32 children?

The children have played a big part in fundraising all year and have made decorations, bracelets cakes and more to sell at various events raising £706 in total. Their Christmas dinner was a huge success and they made excellent waiters and waitresses that evening raised £415. The Queen’s 90th Birthday Bake Off was a fantastic afternoon and the cake auction saw £240 been added to the total.

One final event for the year, on Thursday 7th July, was part of our termly open afternoons where the children demonstrated all of the exciting science experiments they and carried out during the week including: making bath bombs, creating sherbet, making a potato battery and soap boat racing. The afternoon was a runaway success. After school we had a BBQ, games and raffle which was very well attended and by the end of the day a further £314 was been raised leading to the wonderful grand total of £1675.

Specifically this year we have been raising money for new classrooms at Birunda. Each one of the classrooms costs only £800, which means we’ve managed to build two new classrooms. It is a super achievement and we look forward to supporting Birunda in years to come. 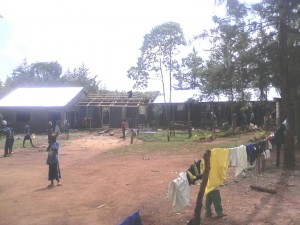