So we get new clubs! This year there are clubs on: Monday, Tuesday, Wednesday and Thursday. The Monday night club is Craft Club with Mrs Hugil, it is AMAZING! So basically you do Christmas Decorations and things like that and It finishes at 4:30. Tuesday night club is Yoga with Ms Stainthorpe, she is a very good teacher you learn positions like the dog, the cat, the cow, the sun salutation, and the moon salutation, and many more. It also finishes at 4:30. Wednesday club is P4C which stands for Philosophy for children, you talk about your opinion on life decisions. There is no wrong or right answer. It finishes at 4:45 so 15 minutes more than other clubs. Thursday night club is language and book club. So basically you have the option between the both of them, but book club is more targeted on the infants but juniors are welcome as well. This club is run by Miss Pierce, and it finishes at 4:30.  I personally like book club  even though its aimed at the infants, I also love craft club, yoga club, and p4c, so that’s all of them.

Today at swimming in our group , we started off with doing lots of widths to warm us up I did breast stroke because I think it is the easiest and its definitely my favourite. Then we did a length of breast stroke. we showed Sarah how we did front crawl and we were a bit bad. She showed us how to do it properly step by step. By the end we did it properly and had improved quite a lot. We practiced diving then it was time to get out. We did it properly with having our heads underwater and breathing to the side.

As you my know Mr Dean is leaving to go and work in Kenya so we thought we should give him an amazing leaving present we asked for ideas and Sally Fitton came up with the idea of making a quilt. So we got to work straight away. It was very hard keeping it a secret from him and he kept asking us what we were doing so we just had to say nothing. Everybody got 9 squares to do a design on you could use triangles or squares or both if you wanted too. Sally started sewing it together and we had lots of different assemblies about it . some of us even stayed after school to work on it he had no idea what we were on about . When we gave it to him it was the open afternoon and he had lots of other presents like sun cream and sunhat and even a brick he also got a calendar with pictures of us on and a school photo he loved all and was very thankful everyone had lots of fun making it . 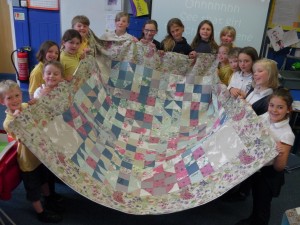 On Monday the 9th May 2016 lots of people went to the jumble sale at Fadmoor Village Hall to buy some things for themselves, also lots of people dropped a lot of their old stuff there, including me. It was very fun because it had chocolate cake. Yum Yum Yum! Lots of people went home with a million bags and then came back for more . Nearly everybody who came got something . It raised £360 pounds so that’s a lot of money for school PTA funds. WELL DONE PTA.

Every Tuesday morning 3 or 4 people go in the “kitchen”( back classroom) this time  me, Alice and Oliver  were cooking a fat free  sponge it smelt and tasted amazing. We mixed eggs and sugar together first then added flour we mixed them together and when it was cooked we added raspberry jam and then glazed strawberries raspberry’s and blueberries  they were glazed in apple jelly and also you can add some cream (optional) our family’s loved them . I wanted too make loads .It was very fun . 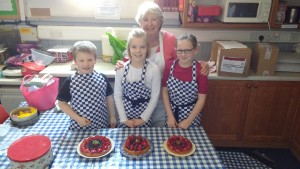 On Friday 25th of January 2016 the year 5s/6s went to Ampleforth Collage to watch a musical put together by the pupils. (I think.) It was very long and the place we were in was cold but the singing and performing  was BRILLIANT!

You could see that they were very good and had practised a lot. Most of them were very clear when singing.

It was set on a boat and they all had a American accent except 1 who was meant to be the classical English character. So there costumes were very sparkly and smart. Nearly every time they came on they were wearing a different outfit.

In the interval we had yummy ice cream some one managed to get it on her eyebrow.(Not mentioning any names.)

Emilia says: It was a fantastic day and the acts were brilliant.

Esme says : that the singing was fantastic  and acting was outstanding !

It was an amazing opportunity I hope others can do it next time.

Thank you Ampleforth Collage for you performance of Anything Goes.

On Tuesday 12th it started to snow by the end of the week some places were at least  25cm  deep . Most of us have built a snowman witch was really fun! We are constantly playing in it. But we need to keep warm with hats and gloves. Everyone keeps slipping over. You need to be careful because all the ice is hidden under the snow! In Farndale and Bransdale the snow is really deep! The ice is so slippy we can sledge on it and go really fast, we keep going flying! Here is a picture of Farndale : 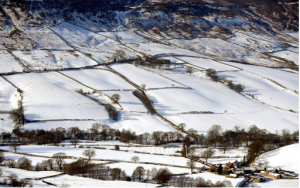 By Minnie and Esme

In the great big long summer holidays our next door neighbour’s sheepdog Floss had puppies. We found out this news and went to se the 7 of them ,they were all so cute . Every time we went to see them we grew more closer to them . We eventually decided to get the one and brought her home when she was eight weeks old to live with us and our dog Dex .She has the long white paw she was also the oldest . We named her Phoebe. We love her very much so does our other dog Dex .

On Tuesday 10th March we played with a new gadget that we got in school. It’s just like a tablet but it is used to learn things. They came with a cabinet that when you put them in they wirelessly charge. We found out that you can do loads of different things. Everybody had fun and leant a lot on the Learn Pads. We hope we use them again soon.

By Esme and Elisabeth.